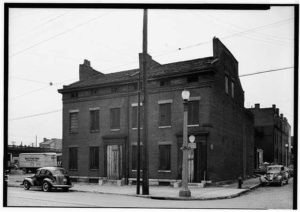 Their romance began when Grant paid a visit to the parents of his West Point roommate, Frederick Dent. According to the memoirs of Julia Dent Grant, the Gravois Creek, which still flows through our area, played a role in Grant’s marriage proposal. After meeting Julia, his visits to the Dent home, known as Whitehaven, became more frequent. Grant was on leave, visiting his parents in Ohio, when he began noticing how much he missed her company. When he returned to Jefferson Barracks, he learned that his unit had been ordered to Louisiana, which was to become a staging area for the war with Mexico, which everyone knew was just about to begin. Grant asked for two additional days leave, and made off for the Dent family estate. The only body of water between him and his destination was the Gravois Creek, which normally had a flow so insignificant, it wouldn’t power a coffee mill – at times, no running water at all. But on this day, after several days of continuous rain, it resembled what we would call a flash flood. With no bridge from its source to its mouth, Grant was left with no choice. He and his horse were caught in the current and carried downstream.

Soaking wet, he was able to make his way to the opposite bank and on to the Dent farm. Julia and her brother were in a carriage, about to leave to attend a wedding when Grant arrived. Borrowing a set of clothes from his future brother-in-law, none of which fit, Grant took the place of Julia’s brother, alongside her in the carriage.

Making their way to a ford in the creek Grant had just crossed, Julia grew apprehensive. “Well Now, Ulysses”, she was later quoted as saying, “I’m going to cling to you if we go down.”

“We won’t go down”, he replied. With the frightened girl clinging to his arm, he drove across. Reaching the other side, he cleared his throat and said, “Julia, you spoke just now of clinging to me, no matter what happened. I wonder if you would cling to me all my life?”

Neither family approved of the marriage. The Dents considered Grant a career military man, with limited prospects. The Grants didn’t approve because the Dents were slaveholders. But after a 4-year courtship, the two were wed. Two future Confederate Generals served as best men, Cadmus Wilcox and Julia’s cousin, James Longstreet.

This house shown was built in 1845 as the town house of Colonel Frederick Dent. Later owned by the St. Louis Board of Education, it was auctioned off on September 28, 1916. John H. Gundlach bought the property for $4,400, intending to have it preserved and turned into a museum. But when Gundlach died, so did his dream. Torn down, it now serves as a parking lot for BB’s Jazz Blues & Soups. [Editor: great blues and brews on most nights].

It’s interesting to note, only a block away sits the Eugene Field House, which people apparently deemed more important.

[Editor’s note: John Sarkis is retired, residing in the St Louis Area. He posts regularly on the St Louis, Missouri. History, Landmarksand Vintage Photos Facebook page. All content is his intellectual Property. Screwups are my fault].