I haven’t written about Major League Baseball (MLB) this year until now.  I’m still a bit discouraged by all the new rules for covid, and those that  have carried over.  The game drifts farther and farther from the one I learned and loved as a child.  Strikeouts are now matter-of-fact; those numbers continue to soar.  Batting averages sink.  There is a controversy about this being linked to many pitchers illegally applying various substances to the balls to improve their grip. Is it that, or that every swing seems to be a “home run” swing?

But it’s still America’s game.  America’s great past time.  Old games stay in our memories, and in the record books.  Just as new stars and events make their ways into the same places.

Consider the phenom playing for the Los Angeles Angels, the once-in-a-century supremely talented Shohei Ohtani.  The Japanese star hits for extraordinary power and is also a starting pitcher.  His home run rate rivals that of Babe Ruth, the other most-famous pitcher-and-hitter; and, depending on how one calculates, Ohtani hits HRs more frequently than the Babe.  Both over his career and especially this year.

Like the Babe in the earlier part of his career, Ohtani is also an exceptionally good pitcher.  Stuck with a mediocre team, his win-loss record doesn’t accurately reflect his talents.  He has one of the fastest fastballs, and regularly throws at, or over, 100 miles per hour.  With a full assortment of pitches and deliveries – cutters, sliders, splitters, curves – he’s dropped his ERA this year to 2.70 and strikes out one-third of batters he faces; both are among MLB leaders.

Ohtani will be at the All-Star Game in Denver next month.  Many fans are looking forward to his participation in the Home Run Derby.

The man was Ernie Shore, a teammate of Babe Ruth’s on the Boston Red Sox.  He is linked to the Babe in other ways besides this particular game against the (first) Washington Senators. Both were earlier sold by the Baltimore Oriole organization to the Boston Red Sox in the same transaction.

[Later, before the 1920 season, the “BoSox” would sell Ruth, known at the time as “The Bambino” to their rival Yankees – even though he had helped lead them to three World Series wins. He was just too expensive and demanding. This became known as “The Curse of the Bambino”, since the BoSox, who had won 5 of the first 15 World Series, did not win another until 86 years later.  Meanwhile, the Yankees won 26 championships, or so, in the same time period.  They had won zero before acquiring Ruth.]

Ernie Shore was a farm boy from the foothills of North Carolina, near North Bend. He was the 2nd of five boys born to Henry and Martha Shore; Ernie arriving in 1891. (My essay about farm boys in MLB here]. Ernie compiled a very respectable record during his four years alongside Ruth on those Red Sox teams, going 58-33.  He also went 3-1 in four World Series starts, helping the Braves win back-to-back WS victories in 1915 and ’16.

[The Sox won another World Series in 1918, this time without Shore, as he had enlisted in the military to fight in World War 1. When Shore returned, he too, like Ruth, was dealt to the Yankees]. 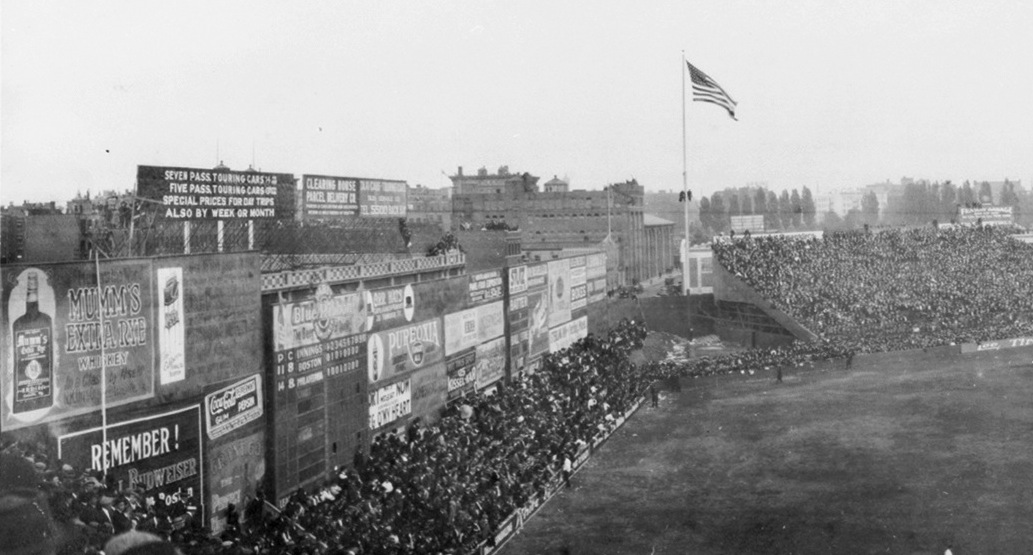 The day was June 23, 1917.  Exactly 104 years ago as I write this. World War 1 raged in Europe.  Bodies fell and blood flowed across Flanders.  Fenway Park, the now famous home of the Boston Red Sox, was barely 5 years old.  Its iconic “Green Monster” left field wall was in place, but that nickname came later.  Then, it was just “The Wall”, put up to keep fans and freeloaders off the field.  There were rows of fans in front of the wall.

The woeful Washington Senators were in town for a 5-game series against the Sox, which would include two double-headers.  Such long multi-game series and double-headers (especially on Saturdays) were more common back then, since travel was very  inconvenient.  One of those double-headers might have been a makeup from a weather-caused postponement earlier.

On this fine Saturday, Babe Ruth was the starting pitcher for the Red Sox in the first game of a double-header.  The game’s first batter walked; he was the Senators’ Ray Morgan, a swift-footed second baseman.  Ruth thought both balls 3 and 4 should have been strikes, and he let the umpire know how he felt in no uncertain terms.  In fact, by many reports, the dispute came to blows. Ruth was ejected from the game. So was the Red Sox’s catcher, Pinch Thomas.

Without warmup or warning, Ernie Shore, who was likely scheduled to pitch the backend of the double-header, was called in to pitch.  Sam Agnew, a part-time catcher, substituted for Pinch Thomas.

The situation seemed rather frenetic, and thus opportunistic, to Morgan.  What with the dustup between Ruth and home plate umpire Brick Owens,  the sudden pitching change, and the sudden catcher change, this seemed like a good time to try and steal second base as soon as possible.

He did try.  The new catcher, Agnew, fired the ball across the diamond to second baseman Jack Barry, who then tagged out Morgan.  It was not a good opportunity.

Morgan was the last baserunner the Senators had the entire game.  Ernie Shore retired every batter; 26 up, 26 down.  The Red Sox went on to win, 4-0.   By the way, substitute catcher Agnew went 3 for 3, and knocked in two of the Red Sox’s runs.

This game used to be listed among MLB’s individual no-hitters and perfect games.  But the rules for such things were “shored up” (sorry, pun intended).  It’s now just an interesting game and one of those baseball oddities.  Maybe it wins you a few bar bets.  It is listed now as a “combined no-hitter.”  Babe Ruth steals the headline again.

After World War 1 Shore resumed his career, now with the Yankees.  However, during the winter of 1918-19 he caught a bad bug from his Navy roommate. Perhaps it was the Spanish Flu.  He was bedridden for weeks. It greatly weakened him.  He had a subpar 1919 season by his standards.  He rested and trained for 1920, but the arm strength just wasn’t there. He was sent to the minors in 1921.  He languished there a few seasons, then retired.  He then tried coaching for a while, but Shore didn’t have the body or the heart for baseball anymore.

He moved back to his native North Carolina.  He got married, raised a family, got involved in local youth sports and politics.  He was even sheriff of Forsythe County for 36 years.

Ernie, Thanks for the memories. We might forget you, but the history books will not.

Thanks for reading. As always, you can add yourself to the notification list for newly published material by clicking here. Or emailing joe@girardmeister.com

One thought on “Shore Up”