I can vividly remember the house I grew up in, in Brown Deer, Wisconsin, just north of Milwaukee, Wisconsin.  It still amazes me to no end that my parents raised six kids in that tiny rambler.

White and blue, with a modicum of brick façade, it sat, conveniently, part way up a gently sloping hill.  It was downhill from our house, along North 49th street, south and down to “the creek” where 49th stopped for a few blocks and you had to turn onto Churchill Lane.  The creek, in turn, meandered from there a mile or so to the Milwaukee River: that brown, slothful, murky body of water that I sometimes walked to for fishing — until I turned 16 and needed a fishing license. Along the creek friends and I would sometimes plunge in to catch frogs and crawdads.  I guess that’s what young boys do. It’s astonishing I didn’t get ill more often.

I called the hill convenient.  That’s because the gentle slope helped all of us learn to ride a bicycle.  Each of us progressed from trike to bike, with training wheels of course.  Day by day dad would raise the training wheels until we could demonstrate that we’d keep our balance without the wheels touching pavement very much.  Then one training a single training wheel would come off.  We were on parole.  After another few days, or a week, the big day came: dad took off the other training wheel.

This is where the hill came in handy.  You need a bit of speed — especially as a beginner — to steadily balance a bicycle.  The hill helped.  The hill plus dad, running alongside for 50 or 100 yards, holding the bicycle, helping with speed and balance.  Back up the hill we’d walk, pushing the bike. Then again. Then again.

Each successive iteration dad held the bike less firmly, until — finally he let go (without telling us!) — he was just trotting alongside … smiling widely.  He did this for each of six children.

My wife and I had three children, whom we raised in two different houses in Colorado.  Each house sat on a street partway up a slight hill. How convenient.

Those were some of the simplest, yet happiest, moments of fatherhood.  I can still see myself, thinking of my dad’s beaming face, trotting alongside each child.  Did they know how loved they were?  In their own joy and pride … could they sense any of the same in me?

Finally it is time.  You let go.

Sometimes they still fell, or forgot how to use the brakes, scraped their knees and hands.

Then you meet them at their needs.  Retreat to simply running alongside, or gently holding. Encourage.

You smile, knowing that they, with their back to you — swerving wildly — are probably smiling too.

That was decades ago. They are all grown now. I’m pretty good by now at letting go. There are still a few things I should let go of.

But those memories?  Never. 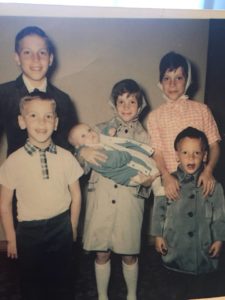