What a fortunate thing for a boy to be close to his father.  Closeness is easier and more natural when there are subjects of interest that lead to bonding – something they share.

The first common subject for my dad and me (that I recall) was our mutual interest in baseball, and our love of the star-crossed Cubs.  This was sort of a quiet suffering that we endured together; each with only the other to console us, as the Cubs were miserably bad during these years (early to mid-60s) and we lived in Milwaukee.

Secretly, when away from dad, I harbored a modicum of admiration for the more competitive Milwaukee Braves – especially when among my sports-fan friends; their roster had several future Hall-of-Famers: Hank Aaron, Eddie Matthews, Warren Spahn, and (probably soon) Joe Torre.  Actually, I think he knew of my treasonous admiration, but never spoke of it.

Another common interest was television.  Back then, families actually watched TV together. The networks and producers really tried to broadcast shows with material that would interest the whole family.  On Sunday nights, it was Ed Sullivan.  Mid-week it was the Red Skelton Show.  But Saturday was special, and the big show in those days was Jackie Gleason, with his Jackie Gleason Show, broadcast “live from Miami Beach.”

After his traditional opening monologue, the show would get started with Jackie saying “And aw-a-a-ay we go.”  The show followed a fairly similar routine each week, with recurring appearances of Gleason-created characters such as Reginald van Gleason III, an oafish, rich, blowhard playboy (“mmmmm, that’s good booze”); and an always-down-on-his luck character  played in pantomime.  There were lots of pretty girls, and great guests, including some regular guests like the popular Art Carney (who also lives forever in re-runs, thanks to co-starring with Gleason in The Honeymooners).

What I remember most – and helped dad and me bond – was a character and regular routine called “Joe the Bartender.”  Bartenders have long been recognized as the world’s best unofficial counselors, psychologists, psychiatrists, and just plain good listeners. That was Joe.

As an aside, my dad would sometimes spontaneously break out into “One for my Baby” (a song made popular by Frank Sinatra) when we were alone: out running errands or he was working around the house, with me “helping.”  The song is a classic “guy-with-broken-heart-tells-his-version-of-the-story-to-a-bartender-at-closing-time” story.  The bartender in the song is named “Joe”, and I often thought as if my dad were speaking to me, but didn’t know what to say, so he broke into that song when we were together. “Set ‘em up Joe.  I’ve got a little story, I think you ought to know …”

Gleason’s “Joe the Bartender” sketch always opened with the camera (as a patron) coming through swinging doors into an empty bar, with Gleason as “Joe” behind the counter.  It seemed “Joe” was greeting us, the audience, as the bar unfolded before the camera: “How ya doin’ Mr. Dennehy?”  The camera (patron) would come up to the bar and engage in a “conversation” with “Joe”, although we-the-audience only heard Joe’s half of the conversation.  We were supposed to supply Mr Dennehy’s half by our own imagination.

This short weekly opening to the “Joe the Bartender” sketch was a tribute to someone important to Gleason.  John Herbert Gleason was born and raised in Brooklyn, NY.  His older brother died at age 14 when “Jackie'” was 3, and his father, an insurance salesman, began drowning his many disappointments in the bottle.  When Jackie was nine his father finally simply abandoned the family – leaving young Jackie and his overprotective mother.  So overprotective that she did not allow him to attend school until the 3rd grade.

Needing to find their own way, she took a series of low-skill/low paying jobs.   Unable to handle life alone, speaking with a heavy Irish accent, and unable to handle her son, she turned to drinking – and she turned to young Jackie to become a co-breadwinner for the family when he was only 12.  He took odd jobs, and eventually became a proficient pool shark and street fighter – making enough money to move out of relative’s homes and into their own apartment.  [If you watch the movie The Hustler, it’s pretty obvious Gleason is comfortable at a table with a cue stick].

They moved to a tenement run by Thomas Dennehy and his family (the Irish Catholics sticking together) at 385 Chauncey St, Brooklyn (one of the more famous addresses in TV history – that’s where The Honeymooners lived).  Dennehy became Gleason’s father-figure, providing a stable male influence in his life – including the crucial time when the drinking finally led to Gleason’s mother’s death, when he was only 17.

During the “Joe the Bartender” sketch, Joe’s one-sided “conversation” with the unheard and unseen “Mr. Dennehy” would eventually turn to something that required a third opinion. “Let’s ask Crazy”… and out would come a character named “Crazy Guggenheim.”

“Crazy” was Frank Fontaine.  His schtick was that he could cross one eye, make his eyes bug out, raise one eyebrow, scrunch up his mouth and talk like a barely lucid and barely intelligible drunk – all at the same time.  His hat and coat were crumpled and worn slightly awry.  “Crazy” would start to answer “Joe’s” question, then wander off topic into some illogical story, raising his voice annoyingly at the wrong times for the story.  Gleason/Joe would start making funny faces – as if to say “I’m sorry I ever let him start” – but wait patiently until Crazy got to the end of his absurd story. 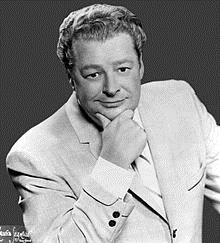 This was another link I had to my dad.  Whenever a situation was just plain goofy or didn’t make sense (or sometimes I thought a situation required a little levity) I’d take my hat and turn up the brim, give it a slight twist and a tip, then say something in a corny voice like: “Hi, hey,  it’s me!  Crazy Guggenheim.”  I even started doing this at big family events (Thanksgiving and such) and found it quite rewarding (as a little kid) that the adults would recognize what I was trying to do – be Crazy like Guggenheim.

The thing about Frank Fontaine was that he was really very talented.  I can’t remember if it was at the end of the “Joe the Bartender” sketch, or later in the show – but he would bust out into song with the most beautiful voice you could imagine.

Frank Fontaine was an interesting fellow.  He married his sweetheart at age 17 and they started having kids … lots of ‘em … eleven in all.  People had so much more confidence in themselves and in the future back then.  He had a lot of success on stage and screen – and on the tube – taking a break from his career and from making babies for World War II.    He always did well, but his stints on the Gleason show made him famous.

He started recording his songs and even had a #1 Album, called, crazy enough, “Songs I sing on the Jackie Gleason Show.”  He also continued with characters like Crazy.  As with  other entertainers who play drunks so well — like Jack Norton and Foster Brooks — Fontaine was a teetotaler.  This made him very much unlike Gleason, who had a second 8,000 square foot house in Miami just for parties. 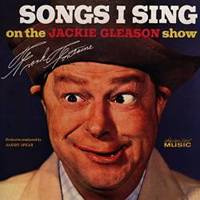 But like Gleason, he was a bit of a bon vivant and started putting on quite a few pounds.  He also got involved with charitable efforts, such as through the Eagles.

In September, 1977 Fontaine suffered a heart attack.  The experience motivated him to lose some 70 pounds over the next year.

In August the next year, at the 1978 Eagles Convention in Spokane he performed live, returning for four encores. Through this concert he raised $25,000; the check was presented to him on stage and it was to be donated to the American Heart Association for heart research.

And that’s when he was struck by a sudden massive heart attack, right there on stage – dead at only 58 years old.  Married for 41 years. 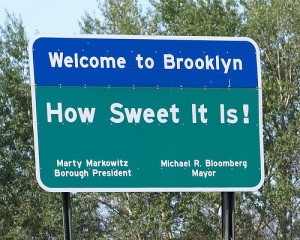 Brooklyn’s pride in being home of Jackie Gleason and The Honeymooners. One of Jackie’s most famous sayings.

1) The Simpson’s character Barney is based on Crazy Guggenheim.

2) Soon enough the Braves proved to be unworthy of all of Wisconsin’s affection, leaving for Atlanta.  Many Milwaukee-area friends became Cubs fans — much to all our chagrin.  The Cubs’ biblically epic collapse of 1969 was assuaged a bit when Milwaukee again received a MLB franchise, the Brewers, in 1970.

To my dad, of course, for spending so much time with me as a kid, even though he had 5 younger children; for taking me to see Cubs games and even Braves games.  Teaching me how to throw (not like a girl), swing a bat, play smart and lose like you win — with dignity and grace.

To my co-worker Gil, who has an amazing memory and helped me reconstruct what I knew of Fontaine and Gleason, and of the 60s.

Jack Fontaine/Crazy Guggenheim does a commercial for Malto Meal

Joe the Bartender and Crazy Guggenheim — from the Jackie Gleason Show.