John D Rockefeller is widely regarded as the wealthiest American ever.  In 2013 US dollars, he would be worth nearly 700 Billion dollars.  In other words he could have bought and sold pipsqueaks like Bill Gates and Warren Buffet … at the same time.

He made his fortune by being the founder, CEO and principal shareholder of Standard Oil, regarded as the largest “Trust” (i.e. monopoly) of all time.  By integrating as many operations as possible – from drilling, to refining, to distribution – he drove down costs and squeezed virtually every other competitor out of business.  He was a viscous businessman, and laid claim to being “the most ruthless American.”

He made his initial stake as a profiteer during the Civil War, selling liquor to Federal troops.  By the time he left management of Standard Oil in 1897, he had also gotten himself well established in the profitable businesses of railroads, steel and banking.  And oddly enough, he also became an avid golfer rather late in life.

He also had become one of the most generous philanthropists of all time.  A Baptist, he had always tithed to his church.  He gave away additional money into the hundreds of millions of dollars (10s of Billions in today’s dollars), founding Chicago University and helped the formation of dozens of schools in the education-starved South for Blacks, including Spelman College in Atlanta, for Black Women.    His total gifts were estimated at over $500 Million, not adjusting for inflation.

Generations of Rockefellers have rode his wealth-horse to political prominence.  His great-grandson, John D. Rockefeller IV (“Jay”) is stepping down as senior Senator from West Virgina (D) after serving as governor.   Grandson Winthrop Rockefeller was governor of Arkansas (R) during the ‘60s, showing unpopular but unwavering support for the Civil Rights movement.  Nelson (another grandson, Winthrop’s brother) was governor of New York (R) and eventually became vice-president under Gerald R Ford, Jr. – oddly, back-to-back vice-presidents who got to that office without a single electoral vote.

“Trust busters” were after Standard Oil since the Sherman Anti-Trust Act of 1890, and in 1911 they had their way.  The Supreme Court ruled that Standard Oil must be broken up into many parts.  We recognize many of them today:

Finally, Standard Oil of New Jersey, the biggest bloom, became simple SO, or ESSO, the phonetic spelling of “S.O.”, for Standard Oil.

Interesting history for ESSO, and it will provide a slow transition to this essay’s conclusion.  When ESSO granted franchises, they were way ahead of their time for allowing Blacks to buy their franchises, becoming independent businessmen.

In the 1930s to 1960s the United States was still full of Jim Crow laws, racial prejudice and bigotry, and Blacks never knew where they would be welcome – South, North or West.  Never really knew where they could get a clean, safe room, a good meal or good local information.  ESSO gas stations – especially the Black owned stations – became distributors of The Negro Travelers’ Green Book.  This was a handbook meticulously prepared by Victor Hugo Green for the benefit of Black travelers, giving valuable insight into how to safely travel the US coast-to-coast and be received as full human beings.

“There will be a day sometime in the near future when this guide will not have to be published. That is when we as a race will have equal rights and privileges in the United States.”
– Victor Hugo Green [one supposes he was named for the French author, but I found no verification]

In the mid-40s, as the country came out of World War II, ESSO sought a marketing symbol and slogan that would personify America’s new found world stature and her citizens’ readiness to seize opportunity.  They chose the symbol of a Tiger and marketed for decades with “Put a tiger in your tank.”

Some clever observers remarked that, instead of a Tiger, they should have chosen the Bee, which would have personified the business practices of the recently-deceased founder.   Get it?  Instead of the ESSO Tiger there would be the ESSO Bee.  JD Rockefeller had a soft generous side, but he was definitely a SOB.

Esso later became Exxon, and still later merged with Mobile, one of the other SO spinoffs.  When Tigers became threatened species, Exxon stepped up to help fund tiger preservation efforts.

Speaking of tigers.  This week the sporting world turns its attention to Georgia, where the US Masters Golf Tournament will be played in Augusta, near the South Carolina border, on one of the world’s most famous and florally beautiful golf courses.  And the most attention will be layered on the world’s (once again) number one rated player, Eldrick Woods, who coincidentally goes by the nickname “Tiger.”

Woods pounds his club into the ground

Tiger is an SOB.  He drops F-bombs all over the golf course, throws his clubs, mutters profanity, declines to give autographs, and — oh yeah —  maintained a stable full of beautiful concubines to cavort with, while  married to one of the world’s most unbelievably beautiful women, who was also the mother of his children. 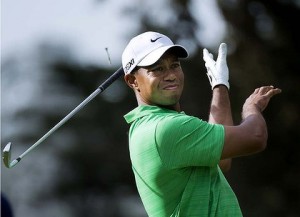 Still, he had “sort of” apologized. He had pledged to clean up his act.  Promised to come back.  Well, he’s back, but he hasn’t cleaned up his act.  Still an SOB.

His recent Nike commercial, released as he broke again to #1 in the world, says enough.  What does Tiger say?  “Winning takes care of everything.”

Tiger throws his putter on the green

I used to hold out some hope for Tiger.  He founded the Tiger Woods Foundation.  Not anymore.  I’m now among the Tiger anti-fans.  I hope he shoots 30-over par this week, misses the cut, swears at reporters, throws a club in the air that hits him on the head harder than now ex-wife Elin ever tried to whack his sorry ass with that wedge back in November, 2010.

He hasn’t grown up by now, and he’s not going to.  He’s no role model, no Victor Green.

But he’ll probably win and make himself and Nike a zillion more dollars.

Either way, I guess I’ll watch.  Golf is a game of gentlemen, except for the likes of Eldrick “Tiger- SOB” Woods.

On a positive note: Here’s a toast to the gentlemen, the philanthropists and Victor Greens of the world.

Until next time fellow travelers, I wish you calmness and goodwill.