An accomplished and successful man in his 50s is driving alone on a work-related commute.

He’s on the edge of an urban area and a highly traveled road.

He’s careful to follow at safe distances, manage speed to account for possible unforeseen events, and is aware of details around him.

He cannot expect what comes next.

Ninety-nine percent of “accidents” are caused by plain old carelessness: lack of attention, distractions, too much speed, following too closely.  Absent a meteor strike, or a patch of black-ice on a sunny warm day, there are very, very few “accidents.” When carelessness is involved, it is NOT an accident. [1]

There are stretches of road where no one should ever get injured – or killed.  Not only does driving a car require great attention, but especially more so when speed, visibility and traffic volume are concerned.

He lived, yet his recovery was not certain.

In a twisted yet logical irony, Bugs Bunny came to the rescue.

Melvin Jerome Blank was born to Russian-Jewish immigrants in 1908, in San Francisco.  Yet, he’d consider Portland, Oregon, his boyhood home town; his parents moved him and his older brother there when he was very young.  Melvin frequently skipped his high school classes: sometimes to attend Vaudeville shows, sometimes to go swimming with friends, and sometimes just to hear the echo of his voice and laughter off the walls of Lincoln High School.

Bugs Bunny, with carrot … of course.

Not surprisingly, his teachers told him he’d never amount to anything, as his name implies: He was a Blank.  So, when he turned 18 he legally changed his name to Blanc.  He’d be known as Mel Blanc the rest of his prolific life.

I certainly remember the Looney Tunes cartoons of my youth, principally in the 1960s.  My recollection is that:

Even at a young age I marveled at Mel Blanc.  How could one person do all those voices? Bugs Bunny.  Daffy Duck.  Elmer Fudd.  Foghorn Leghorn.  Porky Pig. Even the incredibly obnoxious Woody Woodpecker, who was not part of the Looney Tunes/Merrie Melodies line up. The young Blanc had perfected the Pecker laugh by listening to echoes of his own cackles in the empty hallways of Lincoln High.  Mel Blanc certainly earned his esteemed title: The Man of a Thousand Voices. [2]

For about month a after my May 1st “Car Crash” experience I struggled with the most severe long, hard headaches.  It was as if my brain were shared with a dark, angry, unstable person. I gained some relief from identifying this “invader.”  [Purple Man].

Then things changed.  With headaches (I call them HAs) of less severity and more localized nature I needed new characters to “talk to” as headaches came and went, metamorphosed, changing location, intensity and duration. HAs now have type and location.  Types are “the vise”, “the power drill”, “the jackhammer”, “the grinder.”  But now they also had more specific locations.  And the locations changed.  How to identify the different areas of HAs?

That’s when I recalled the zany, zany characters whose voices and sounds were portrayed by Mel Blanc.  Yes, from Looney Tunes and Merry Melodies.  I had a whole cast of characters, with faces, names, personalities and (thanks to Mel Blanc) voices that I could draw from.  I set about assigning these characters, and others, to the various parts of my brain.

The left of my frontal lobe is Bugs Bunny.  He is smart, smart alecky, and almost always outwits other characters.  I’m right handed, so that’s where most of my high level thinking occurs.  Bugs also can dive into his rabbit hole. So he is also assigned to the section of my brain behind my left eye – he just dives in there. Bugs is clever; I have to be careful with him.

Wile E Coyote is the right frontal lobe. He’s smart too, and creative: he can conceive of and assemble rocket-powered roller skates.  Still, his creativity is limited by the short-sightedness of left-handed emotion.  He frequently falls great distances, cratering into the desert floor.  Therefore, he also gets assigned the section of the brain behind my right eye. The key to Wile E is to wait him out; he’ll burn himself out, sooner or later.

In the mid-brain we have parietal lobes.  Among other things, these lobes allow us to process and integrate lots of information simultaneously. They control many voluntary motions and permit us to multi-task.  When these hurt, I can have problems thinking about more than one thing at a time; sometimes it’s difficult simply interacting with people, or even keeping my eyes open. Lately, these regions have been the most — shall we say — “active.”

Further back we have the occipital lobes.  Although these are mostly for processing visual inputs (and generating hallucinations), I’ve saved them for Elmer Fudd  and Porky Pig, left and right, respectively. Elmer Fudd dwells on the left.  “I’ll get you, you wascally rabbit.”  And Porky Pig on the right.  I’ve had a special spot in my mind, heart and soul for Porky Pig since I was very young.  I stammered horribly through my youth – like Porky – going even into young adulthood.  When headaches leave I can send them off with Porky’s (or Blanc’s) signature line “Th-th-th-that’s all, folks!”

In January, 1961, Blanc was driving to his office, winding through the foothills of north Los Angeles, near Beverly Hills, along Sunset Boulevard.  Sunset twists through the tree adorned hills and washes. Yet with few traffic controls on Sunset – all cross streets must defer to Sunset traffic – the unfortunate tendency is to drive too fast. Perhaps stimulated by the beautiful hilly and tree-scaped scenery, many drivers simply zip along – California Dreamin’.  Blanc knew the road well, and drove carefully as he approached the notorious “Deadman’s Curve.” Located near Whittier Drive, near the north end of exclusive Los Angeles Country Club – and fortunately, near UCLA and its renowned hospital – it had been the site of dozens of horrific accidents since the 1940s.

Headed the other way was an 18-year old university student, Arthur Ralston. Perhaps he was in a bit of a hurry.  Perhaps distracted.

They met at Deadman’s Curve.

There are a few things in my own brain left to discuss here.  First, the temples.  Since Mel Blanc was Jewish, for him temples were also synagogues.  The left temple I call “Syn-Syn”; it is a place of quiet meditation.  Of course the other, the right, is called “Shirley.”  Eventually she will sing and dance and fall asleep. It’s a good ship, that lollipop.

The last part of the brain to address is the Cerebellum, below the occipital lobes and stretching down to the upper neck.  The left comes first, so we call her Ante.  When antebellum is acting up, I imagine that the “quiet before the war” is returning.  The right is called simply “Cere”, as in Sarah.  I know several beautiful and intelligent women named Sarah.  Calling up their images are soothing and relaxing to me.

More than a few episodes of Looney Tunes had a surprise and unexplained visit by a marsupial: the Tasmanian Devil, AKA “Taz.”  Taz shows up for no reason whatsoever; he whirs about and babbles in a non-understandable gravelly voice.  He bounces from tree to rock with unfocused energy, causing damage wherever he bounces.  Like a pinball, he whirs through my head … and then, he’s gone. Like the cartoons, sometimes he is outsmarted by Bugs, sometimes Daffy.  He’s violent, but manageable.

The “cranial conductor” is the Genie, a la Robin Williams in Aladdin. Together, with my inner Buddha, we can order “Silence!” — and it is so.  To call the Genie, I use my own variation on something very Boulder-ish called Buddha-breathing.  It works as follows.  Placing fingers upon the regions of my skull that correspond to the Looney character causing a headache … I breathe slowly and deeply. I imagine that the inhale draws up the “smoke” from the characters’ fire.  I call them out: “Foghorn, boy, I say boy. Give me your anger, your smoke.”  Then, imagining a hole where the finger(s) touch my skull, I imagine that my slow exhale blows the smoke out the hole.  Eventually, some quiet is restored.

Weird, I know.  We do what we must. Bugs Bunny and his cohorts, the Genie and others have given me some modicum of a sense of control over the storms in my head. And some sanity.

For weeks Blanc lay in the UCLA hospital.  A severe brain injury resulted in a coma.  He had multiple major fractures, including his pelvis. When he had come out of his coma, he was still unresponsive to his environment.  Not to his wife or family.  After a few weeks, one of his doctors had an idea.

He simply went up to Blanc’s bed and asked “Hey Bugs Bunny, how are you feeling today?”

Without missing a beat Blanc fell right into character.  “Me-ehhhhh, What’s up Doc?”

Witty repartee followed.  The Doctor then asked “And how is Tweety Bird?”

Blanc was back.  He eventually recovered and continued doing voices, and giving children of all ages great delight, for a few more decades.

Wishing you peace and sanity through the upcoming holiday season!

RIP and Thank you Mel Blanc

[1] “Why there’s no such thing as a car accident.” http://driving.ca/auto-news/news/why-theres-no-such-thing-as-a-car-accident

2) “Did you ever find Bugs Bunny attractive when he put on a dress and played like a girl bunny?” (Garth, in the 1992 movie “Wayne’s World.”)  Answer: When I was a kid no, but I certainly noticed it. Now, Yes: I love all the images of Bugs Bunny I can conjure up.

4) Some Blanc info from here: http://www.ochcom.org/blanc/

5) My last essay made reference to Stealer’s Wheel: “Stuck in the middle with You.”
Now you know with whom I stuck in the middle.  It is a plural you.  It is Bugs, et al. It’s kind of busy in there. 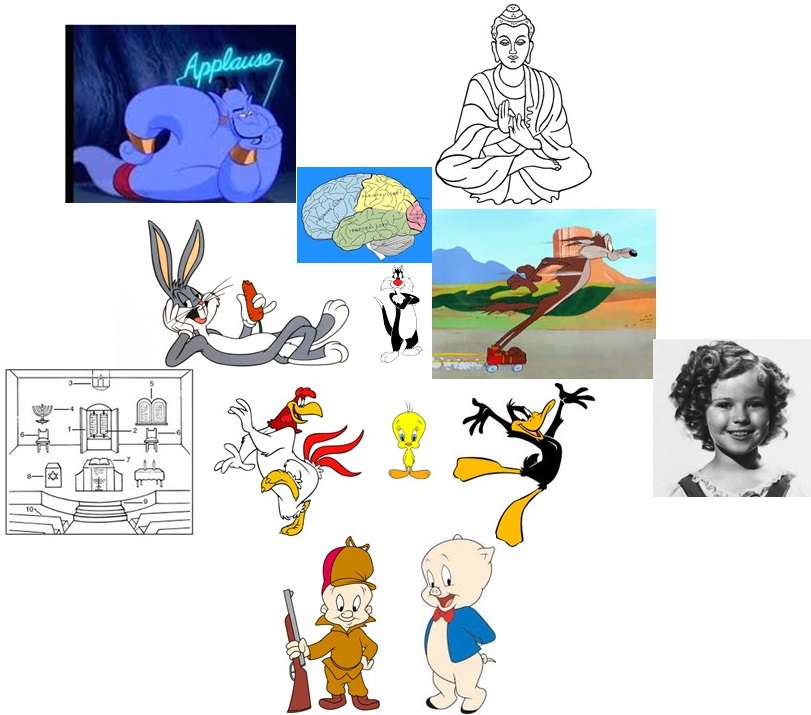 Stuck in the middle with you all