Eyetooth: A canine tooth of the upper jaw –Webster’s Dictionary

Oddly, Webster’s does not define Canine Tooth.  Nor the character developed by A.A. Milne.

Canine Tooth: Any of four teeth having a thick conical crown and a long conical root, adjacent to the distal surface of the lateral incisors, … also, cuspid. – the Medical Online Dictionary.

He had never seen his wife.  A few years before they met, he was blinded as a result of a horrible chemical accident at work.  The damage to his left eye was so severe that it was completely removed.  His right eye was too unhealthy for him to qualify as a candidate for corneal transplant.

Still,  one  ophthalmic surgeon held out hope.  His retina was reasonably healthy.  It had a blood supply and nerve activity. If they could just get some light to it.

She was intensely crippled by colitis.  Constantly faint and feverish, passing out and falling into slumber – whether pain or fatigue induced, it did not matter – was her only relief for so many months that she could not remember.

Nothing seemed to help.  Cramping seized her abdomen for days, weeks … months; and rocked her from deep in her intestines.  Could medicine bring a young woman back from the edge of darkness, and return the healthy mother that her children needed, and deserved?

Harsh circumstance often gives rise to imagination and creativity.  The first two decades of the 19th century were cold, but the year 1816 stands out as especially cold, wet, grey and depressing.  Such would be the circumstance that gave the world one of its most creative stories that still holds our imaginations today.

First: why was it cold?  Scientists have long noted a strong correlation between solar weather an earth’s climate patterns.  The best indicator of solar weather is sun spot activity.  Since the Medieval Warming Period (the period that gave rise to the colonization of Greenland, 950 to 1250AD), the northern hemisphere was generally cooler until about 1900.  During that period, there have been two periods of especially low sunspot activity: the Maunder Minimum from about 1645-1745 (coinciding with the Little Ice Age) and the not-quite-as-severe Dalton Minimum of about 1790-1830, which also coincided with lower-than-average temperatures.

1816 will forever stand out in history.  In the United States, Canada and Western Europe it has many names, including “The year without a summer.”   Bedding and clothing hung out to dry often didn’t dry; rather they froze stiff on clotheslines that summer.   Rivers and lakes froze over in July and August across New England and Pennsylvania.

The Dalton Minimum cruelly coincided with a short but intense period of extreme worldwide volcanic activity.  Five major worldwide volcanic eruptions, beginning in 1812 on Saint Vincent in the Caribbean, spewed tiny particles high into the atmosphere.  Rather than settle out, these road the earth’s upper air currents, until she was shrouded in a type of early sunscreen.  The last of the five, in April 1815, on the Indonesian Island of Sumbawa, was of biblical scale, the earth’s largest eruption in over 1,600 years.  The blast was heard nearly 2,000 miles away.

As crops failed and moods drifted to dreary, Percy Shelley (among the finest lyric poets in the English language) and his 18-yearold fiancée/girlfriend Mary Godwin found themselves in Geneva, Switzerland. They were for a while the guests of famous English poet and ex-patriot Lord Byron, and his personal physician John Polidori.

The weather that summer was so abysmally cold, wet and dreary that they decided to pass the time telling each other creepy stories of the supernatural, and topped it off with a writing contest: they would all write imaginative stories of the most bizarre and terrifying sort.

As imaginative and disturbing as the story remains today, it cannot match the imaginative healing powers of the human race, and the human body, to which we now turn our attention.

Months before the final bandages were removed from his right eye, a strange and bizarre Frankenstein-like process was begun.  MOOKP.  They would soon know the outcome.

The first step was pretty simple, if not odd: removing some of the tissue that lines the inner mouth, and using it to replace some corneal tissue in the eye.  This would put receptive, healing and moisture producing tissue where it needed to be.  It would become the healthy blood nourishing platform for what would come four months later.

The next step involved removing a cuspid tooth from the jaw, complete with roots and part of the bone.  The tooth was then ground to the desired shape and size.  A hole was drilled into the tooth, which received a plastic cylindrical optical lens.  The next step was to embed the tooth somewhere in the body where the roots would continue to receive nourishment, and the tooth would grow a thin protective sheath.  For this patient, it was in his substantial cheek tissue.
For four months the oral tissue grew in the eye, and the tooth remained “alive”, embedded in the cheek.  Then it was time: Let there be light!

In the final surgery, the new corneal replacement tissue in his right eye (the tissue from his mouth) was peeled back.  Then the tooth (yes, quite literally an eye tooth) — with an optical canal filled with a plastic lens, and coated in a thin layer of sheathing — was removed from his cheek and embedded in the new corneal replacement tissue.  Positioned just so, in his eye.

When the bandages were removed, light passed through the canal of the tooth, onto his retina.  He saw his wife, and she was beautiful.

Over the months, as his retina is re-trained in seeing, his vision will grow keen.

This process is called Modified Osteo-odonto-keratoprosthesis (or MOOKP).  It works.  The eye is not likely to reject tissue from the same body, and the plastic lens – coated by a thin sheath that was grown in while in his cheek – is not detected by the eye.  [Sources and resources for this story below, in bibliography]. 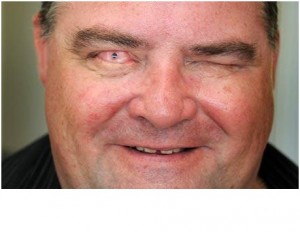 A Very Happy Man: Sees because he has a tooth in his eye

The severe and crippling colitis was the result of a raging C. diff infection, short for Clostridium difficile. The human gut is full of many trillions of bacteria – more than 1,000 different types in the large intestine alone – and they are mostly beneficial to humans.  They inhibit the growth of pathogenic bacteria.  For digestion, they produce enzymes that degrade the largest biomolecules.  It is a weird little ecosystem in our guts: bacteria thrive on some of our food, but the waste they generate is in turn food for us.  Life for humans could not exist without these beneficial bacteria.

As humans, our western doctors tend to prescribe a lot of antibiotics.  Perhaps too many and too often. One possible negative consequence of taking antibiotics is that too many of these beneficial bacteria are killed – and get flushed out with the poo.  A mild case might result in tummy rumbles and a period of diarrhea, until the body can rebalance itself.  Gone too far, and the body’s last feet of the alimentary canal can be taken over by the opportunistic  C. diff bacterium, well known to lurk around hospitals where sick people with weakened intestinal bacterial can succumb to a new unwelcome colonization.

Our young mother was treated with antibiotics for an oral surgery several months ago.  An extreme case C. Diff resulted, taking over her intestines and causing a raging case of colitis that crippled her, and brought her family’s lives to a stop.

The process for jump-starting her healing began only a few days before the big procedure.  First a donor was selected. Usually it is someone close like a spouse or family member.  For our young mother it was her husband.  The process requires the donor to produce and submit a healthy stool sample for the necessary lab work.

Meanwhile, the patient has started a gastro-intestinal purge – a process that someone preparing for a colonoscopy might find familiar, if not uncomfortable.  Two days of fasting and treatments with colonics has done the trick.  It wasn’t fun, but months and months with debilitating colitis wasn’t fun either.

Cleared for the procedure, the patient is anesthetized.  The process is not that dissimilar, again, from the colonoscopy.  A tube — inserted through her anus, past her rectum and up through the colon in to the intestines — delivers a slurry.  It is a sort of blenderized purée made from her husband’s feces.

This slurry contains several trillion healthy and benevolent bacteria.  Within hours, in fact before she awakes, they have begun colonizing her entire bowels – large and small intestines.  The C. Diff is forced out by the more vigorous bacteria, “donated” by her healthy husband.  In just a few more days her family will get her back —their mother – his wife. She will get her life and vivacity back.  Delivered from despair by a poo transplant, or more officially: a fecal microbiota transplantation.

Every human mind is full of creative potential, fueled by imagination, life’s experiences and observations, — and each individual’s needs, goals, desires, hopes, dreams.  For 18-year old Mary Shelley it was a deep, cold, dark summer.  For doctors, it is their bravery to see beyond ordinary disgust and seize upon truly innovative methods to bring health to suffering humans.

What will it be for you?

Now, do you have another definition for “eye teeth”?  The next time someone comes up with an outrageous yet creative idea, will you say “pooh”?  Or “Good for you”?

Michael Mann (of Hockey Stick fame) on the Little Ice Age, and other global weather and temperature periods pre-1900.  http://www.meteo.psu.edu/holocene/public_html/shared/articles/littleiceage.pdf