October 17, 1974 — 41 years ago this month, The Spirits of St Louis basketball team played their first home game, marking the return of professional hoops, after the St Louis Hawks had moved to Atlanta in 1968. 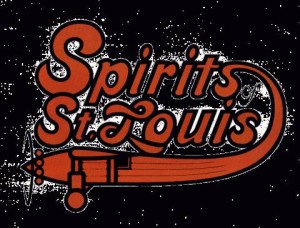 I could mention the team’s budding young stars, as well as their misfits, or how it helped launch the career of their play-by-play broadcaster, recent Syracuse University student Bob Costas [1]. But in the stories I write, I try to tell of lesser known facts, that most aren’t aware of. So this isn’t so-much about the team, but rather, their owners. And what most — not only in the sports world, but throughout all businesses — consider to be the best business deal of all time.

Many who are younger, or aren’t basketball fans, might not remember when there were actually two professional basketball leagues operating in the United States, the National Basketball Association (NBA) and the American Basketball Association (ABA). The ABA was started in 1967 as an attempt to end the NBA’s monopoly on professional basketball, and at the time, posed a significant challenge to the NBA’s dominance. ABA team owners started an all out salary war by offering young players larger contracts than their NBA counterparts could afford, and introduced new ideas since adopted by the NBA, like the three-point line and the All Star Game dunk contest.

Brothers Ozzie and Daniel Silna were sons of Latvian immigrants who had settled in New Jersey in the 1930s. Their father ran a textile business which both brothers later took over, until they sold the company in the early 1960s. Ozzie and Dan then started their own business that eventually became one of the largest manufacturers of polyester in the world. Dan Silna, a lifelong basketball fan, attempted to purchase the Detroit Pistons for $5 million, but their offer was rejected. So instead, they purchased the ABA’s Carolina Cougars in 1974, moved the team to St. Louis, and renamed them the Spirits.

At the time, most ABA teams sensed there would be a merger with the NBA, and by moving the team to St Louis, the largest market without professional basketball, the Silnas felt this enhanced their chances of joining the enlarged league. But with attendance averaging about 2000 a game, and the highest salary structure in the sport, the team was losing money.

After the 1975-76 season, four of the former ABA teams were absorbed into the NBA, but St. Louis and the Kentucky Colonels weren’t included. Kentucky owner John Y. Brown took a $3 million settlement. But the Silnas bargained for more. To keep the St. Louis owners from fighting the merger in court, the NBA and the St. Louis team owners forged what turned out to be an incredible deal. The Silnas agreed upfront to a $2.2 million cash payment, and a one-seventh share of the TV revenue from the four ABA teams going in the NBA – the New York Nets, Denver Nuggets, Indiana Pacers and San Antonio Spurs. These payments would be made “in perpetuity”, meaning – FOREVER.

At the time, the TV contract was worth almost nothing. But with the sport growing in popularity, broadcast rights are now in the hundreds of millions of dollars.

They have no association with the sport, and most don’t even know who they are. But for nearly 40 years, the Silna Brothers have walked to their mailbox nine times a year to pick-up checks from the NBA totaling nearly $300 million.

Always a thorn in the side of the NBA, they have repeatedly tried to reach a cash settlement with the brothers, and last year, an agreement was reached. It was reported that the NBA would give the brothers a one-time cash payment of $500 million, to end the contract. [2]

editor note [1] — Bob Costas did not earn a college degree, dropping out of Syracuse university, first to do broadcasts for the Syracuse Blazers, a minor league hockey team. His drop out was complete, when, at age 22, he got the opportunity to do play-by-play announcing for the Spirits.  A native of New York city, born and raised, he also considers St. Louis warmly as his co-hometown.  [St Louis Magazine, July, 2013: Q&A with Bob Costas, by Wm. Powell –> http://www.stlmag.com/Q-A-A-Conversation-With-Bob-Costas/]

One thought on “That’s the $pirit!”